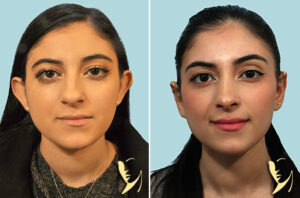 At Robinson Facial Plastic Surgery, our priority is YOU, the patient.  Our goal is to ensure you have a positive, stress-free experience so helping you understand your cosmetic payment options is an important part of the process.

Ear Surgery, also known as Otoplasty, improves the shape & position of the ear and creates a more natural shape bringing balance and proportion to the ears and face.  It can correct a defect in the ear structure that is present at birth or it can treat misshapen ears caused by injury.  Otoplasty is performed on more children than adults and corrects one of the only physical abnormalities that cries out for cosmetic surgery.  Children with protruding ears, or “lop” ears (where the tip of the ear fold over), are often victims of cruel nicknames like “Radar” or “Dumbo,” which can lead to poor self-esteem, poor social skills, and low classroom participation.  “The sooner, the better for corrective ear surgery,” says Dr. Burke Robinson.  Better to correct the defect before psychological damage from peer ridicule occurs.”

Dr. Burke Robinson is an award-winning, Top Atlanta Facial Plastic Surgeon with 30 years of experience dedicated to only facial cosmetic surgery and specializes in Otoplasty.

A soft, thick dressing is placed on the head for one day.  When the dressing is removed the ears will be somewhat swollen.  A soft headband is worn at night to protect the ears.  The patient can return to school or work in less than a week and full activity (including sports) in approximately two weeks.

Who is a Good Candidate for Ear Surgery?

Most patients know themselves if they are a candidate for an Otoplasty or Ear Surgery.  This is an inherited trait, and in general presents with an angle between the external ear and the skull of >30 degrees.  There are two different minor malformations of the ear that cause this.  One is a poorly formed antihelical fold, and the other is an overdeveloped/large conchal bowl.  These two findings can appear in a varied mixed degree e.g. isolated or both together and on one or both ears.  Correction is performed through a well-hidden incision behind the ear using permanent sutures for a permanent result.

Dr. Burke Robinson is an award-winning Top Doctor with 30 years of experience dedicated exclusively to facial cosmetic surgery. He has devoted his life to helping others transform their dream look into a beautiful reality while maintaining natural-looking results. Widely known for his genuine compassion, honesty, and deep commitment to providing the utmost in surgical care and results, Dr. Robinson has become one of the most trusted cosmetic surgeons in the Atlanta area.

At Robinson Facial Plastic Surgery, our priority is YOU, the patient. We look forward to helping you!
CALL 770-667-3090 TO SCHEDULE YOUR CONSULTATION